Not only am I blessed to currently have 2 handsome Newfoundlands, but I’m also blessed to be loved by them.

I also have the best of both worlds because 1 was adopted and 1 was purchased from an ethical breeder.

This puts me in a unique position and as a writer and proud member of the Newfie community, I feel it’s only right that I share the obvious.

Now, if you took the time to click to read this post, first of all, thank you.

Second, this isn’t going to be anything new to you because I feel that we’re at the same level of education in regards to purebred dogs, specifically the purebred Newfoundland, but I want to share in hopes of reaching someone considering the breed or new to the breed. 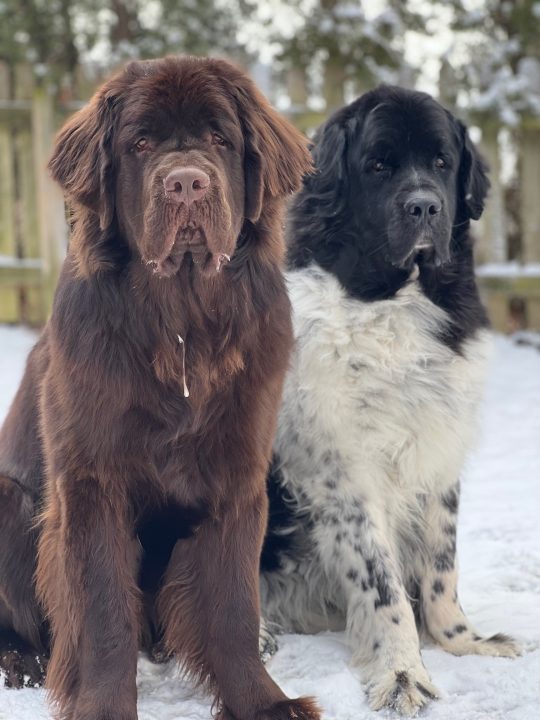 As Lou continues to grow and I see him and Odin side by side, it’s a constant reminder that both are purebred Newfoundlands but bred by two totally different breeders.

You may or may not have seen it in the past but physically Odin and Lou are different.

Odin is not as structurally sound as a Newfie is supposed to be.

He’s smaller, has lighter bone, high in the rear and his eye color is lighter than it should be.

While beautiful, he has obvious undesired traits.

Odin is not well-bred and I was made fully aware of this when I adopted him.

Lou is still growing into his body, but he’s headed in the right direction.

The Not So Obvious

In Odin’s case, this means that he was rescued from less than stellar conditions.

He was not wanted.

So he was surrendered.

Any breeder that cared about him would have been the first to take him back or found him a suitable home. 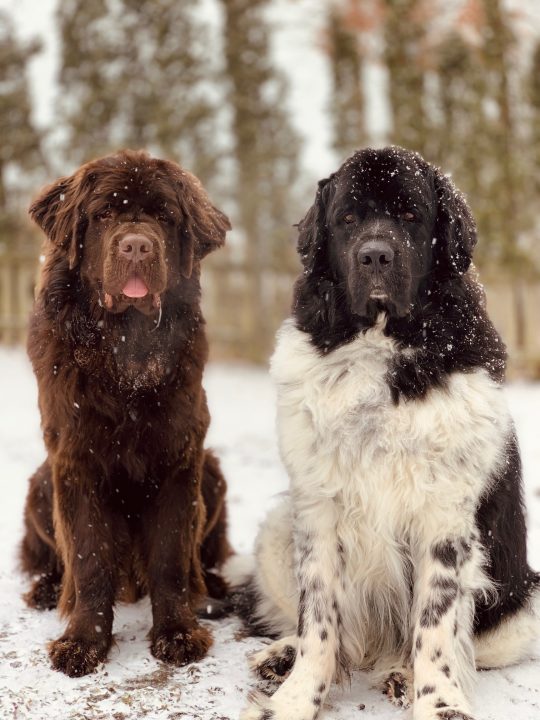 I’ve seen this comparison floating around social media for a few months now and while it’s easy for us to tell the difference between the two, we are not in the majority.

I think it’s easier to try and simplify the comparison.

Any dog can be purebred but the breeder determines how well-bred it is.

There are a lot of terms that a dog breeder can be called, responsible, heritage, ethical, hobby, preservation, ethical, backyard, puppy mill….etc, but I’m just going to use BYB and ethical right now.

A backyard breeder breeds for money, does not breed to better the health of the breed, doesn’t follow guidelines, doesn’t health test and doesn’t care about the well-being of their dogs or puppies.

They don’t interview potential owners, they don’t take their dogs back.

An ethical breeder breeds well-bred dogs that not only meet the breed standards but also care about meeting them.

They do health testing, they screen owners, they carefully plan litters and THEY TAKE THEIR DOGS BACK.

Their dogs do not end up in shelters or rescues.

An ethical breeder sets their dogs up for success from the beginning.

An ethical breeder breeds well-bred dogs so they have the best shot of being what they are supposed to be.

ALL DOGS DESERVE TO BE WELL-BRED.

I posted the above in a recent TikTok.

Obviously, it was edited down to fit in a 60-second video but the main points were addressed, or so I thought.

Both handsome AF and both loved dearly but both were not created equal. #newfoundlanddog #landseer #newfies #brownnewfie

It was well-received to an extent.

So I’m going to address some of the more common confusions next. 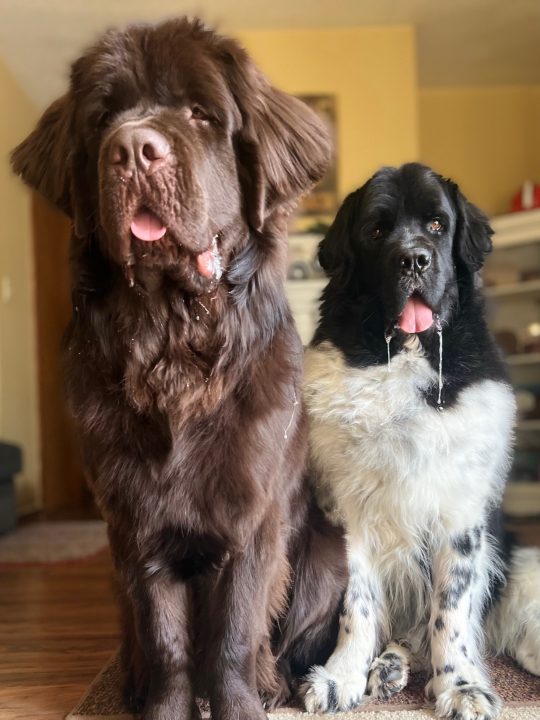 But What About Type?

Odin and Lou obviously look different and there were comments that people preferred Odin’s “type”.

Odin is gorgeous, don’t get me wrong, but if you prefer Odin’s type, you can find his “type” in almost every Newfoundland Rescue in the country right now. 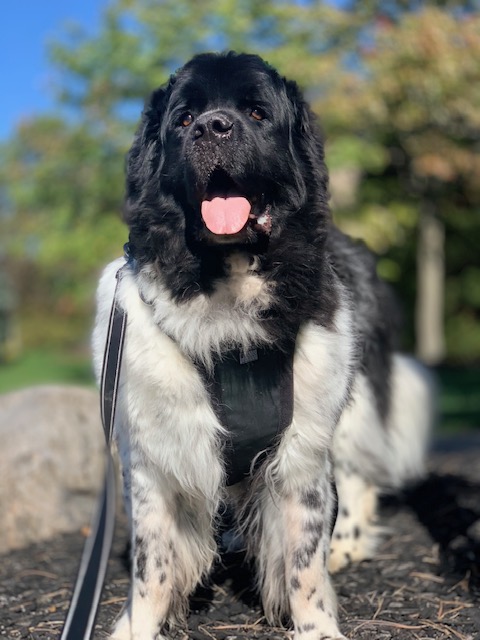 What Is Breed Standard

There was a lot of confusion about the term breed standard.

Breed standards involve more than the looks of a dog.

Standards describe desired type, structure, gait, and temperament of the breed all of which are characteristics that allow the breed to perform the function for which it was bred.

No breed of dog is going to meet those qualities 100% but an ethical breeder strives to get as close.

Breed standards are created by the breed club, and the AKC approves them.

Breed standards can have as many words as possible to make it necessary to describe.

Some breeds have 300 words, and others have thousands.

The Newfoundland Breed Standard currently has 1,100 + words and was last updated in 1990. 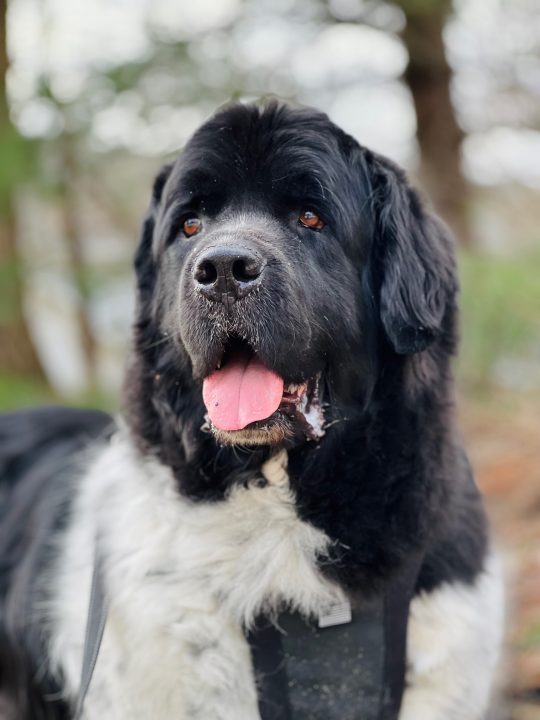 But The Landseer Is a Different Breed

There was definitely some confusion on this and with good reason because it can get confusing.

Recognized colors in the Newfie in the United States are black, brown, grey and white and black.

Most Americans refer to a white and black Newfoundland as a Landseer.

The confusion comes from the ECT Landseer, which is not a recognized breed here in America, yet.

An ECT is a Landseer European Continental Type and it is not a Newfoundland.

It’s taller, longer has a lighter coat, more energy, and has a different temperament.

The last time I checked there were only 1 or 2 breeders here in the United States and all of their dogs were imported from Germany.

That was years ago so it might have changed.

This was definitely a hot topic too.

Ethical breeders will have their dogs and puppies health tested.

That means that a breeder should have clearances done on all breeding dogs.

For Newfies, according to the NCA, this includes hips (x-ray), elbows (x-ray), heart (cardiologist) and cystinuria (DNA or parentage). The NCA also strongly recommends testing, where indicated, thyroid, eyes and patellas.

I’m sure Odin did not have any of those tests done.

Yes, he’s healthy so far and I can only continue to hope that he stays that way.

No Dog Is Perfect

There were definitely people that did not like the way Lou looks and that’s fine.

I personally prefer Lou’s type and that’s why I searched for a breeder that produces his type.

But Lou is not perfect.

All Dogs Deserve To Be Loved

We all know that every single dog deserves to be loved but they also deserve to be well-bred and that is a concept that is overlooked.

They deserve someone who wants them to succeed from the beginning.

Where do we go from here?

Just when I think we’re making strides it becomes clear we have a long way to go.

Little by little, we chip away.

The goal is not to reach every person in the world, if you reach just one it’s worth it.

And to end, if you bought a dog from a BYB breeder, don’t hang your head low.

I did too many years ago.

Another website has been scraping my articles so if you see this on another site, it was published first on mybrownnewfies.com

Why is My Kitten Hissing at My Older Cat?