Welcome to the Mewton-Clawson Library at BBHQ

Thank mew for joining me in the stacks today, and many apologies for not being here on Wednesday for our usual Midweek News Round-Up.
It wasn’t planned to miss the post; the P.A. was working on the Easter Crafting with Cats project for later in the month. Mew know what I’m going to say next don’t mew?

Yes, she decided rather selfishly to injure herself again! TSK TSK TSK!

Mew think she would have learned her lesson by now, but NO, this time she was using the hot glue gun and wasn’t paying attention (TSK TSK TSK) and some of the boiling hot glue landed on her fingers, subsequently burning her. Her index finger is the worst, the burn was quite deep and so she is plastered up and feeling pretty sorry for herself.

Personally, I have no sympathy as for the life of me I can understand how it happened when the glue gun was in her right hand and her left hand (the injured one) shouldn’t have been anywhere near the glue gun when she squeezed the trigger.

I tell mew, if one of The B Team had been in the craft room with her it wouldn’t have happened.

But the good news is, if mew can call it good news; the Easter craft project is epically epic and I’m sure mew will love what we created this time. 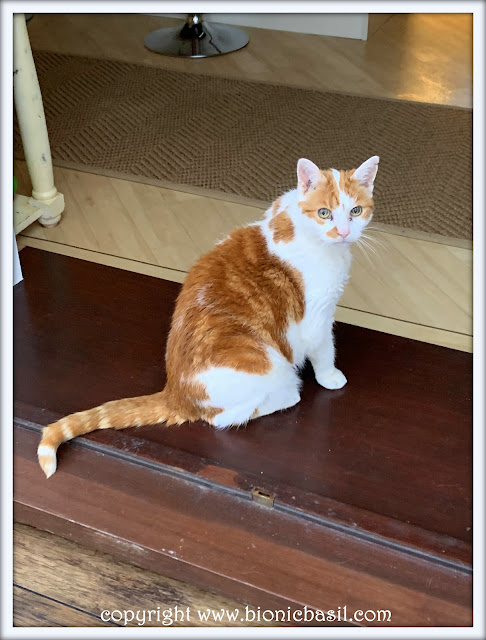 Anyhoo, this was me the other day when I couldn’t decide if I wanted to be in the catservatory or the house, so I sat on the step and pondered my options for ten minutes before deciding to go into the sitting room, and getting snuggled in a fleece nest on the sofa.

Guys, Brian’s dad Terry was rushed into hospital earlier in the week, so purrlease send him oodles of healing purrs and pawsitive vibes.

The B Team wish him a supurr speedy recovery and hope he’s feeling better soon. 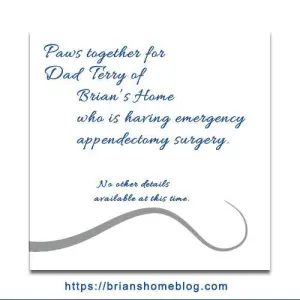 1. I love that I write a blog and books. I adore creating stuff.

2. To celebrate pi day on Monday, I will have a slice of blackberry and apple pie with custard.

4. If I ended up in jail, it would probably be because someone had intentionally hurt my cats and I unleashed hell on them.

Let’s see what I’ve got to show mew this time!

This week’s top book pick is… 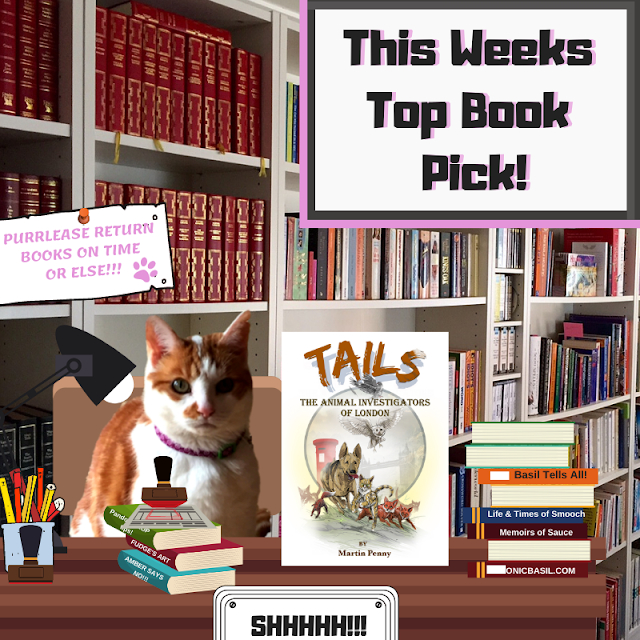 The Animal Investigators of London

Yowl is a very special tabby kitten owned by 6-year-old Lucy. Sitting on her lap through endless children’s books, he learns to read. From the local paper, he discovers there’s a criminal on the loose in Croydon targeting cats. TV news reports confirm over seventy incidents. With the help of his feline neighbours, he enlists the support of Big Red, the leader of the foxes, to hunt down the killer. Secret, a squirrel who’s afraid of heights, will play a crucial role, but it’s Hoot the owl whose help they need most. An eye in the sky will prove essential in identifying the culprit. Yowl will be forced to risk his life to earn his assistance. Just as they’re making progress, the police close the case. They point the finger firmly in the direction of the foxes. In response, Big Red steps up their involvement. Together, they identify the killer, but what can they do to stop him? The Animal Investigators of London is a charming and humorous tale of an uneasy alliance of neighbourhood animals coming together in the face of a dangerous criminal. The narrator, Yowl, has much to learn, but nobody can question his bravery. Featuring cats, dogs, a squirrel, a pigeon and a whole skulk of foxes!

I started this book last weekend and before I knew it, I had devoured 85 pages. And in my next sitting another 80 pages and in my third sitting I finished it.

What a fabulous read, and as the story hurtles along we meet a whole host of other rather colourful and diverse characters, including a pigeon and a squirrel.  The main character, Yowl the cat is on a mission to solve multiple heinous crimes happening to local cats, and with the aid of his new found furiends they start whittling down the suspects.

Based on real-life crimes committed by the Croydon Cat Killer in London, this book is a fictional tale told from the anipals eye-view, and their desire to band together to find the real culprit.

Though primarily written as a children’s novel, I can attest that it is suitable for all ages especially given my senior years.

And although the story is based on a serial crime spree, there was nothing too upsetting or scenes that could be offputting. It does have moments of comedy, with a punchy narrative that keeps the story flowing and the pages turning rather quickly as events unfold.

As mew know I don’t do spoilers so I won’t spoilerize it for mew, but I will say this, I really enjoyed this book and hope the author pens a few more, as I will definitely add them to the Mewton-Clawson library.

A top paw read, which I highly recommend!

Available to purchase from 22nd March 2022

Tails The Animal Investigators of London

Other Fun Blog Hops to Join in Today

I really hope mew enjoy the book as much as I did if mew decide to read it.

It’s time for me to say BFN or bye-for-now as mew know the drill, so many books, so little time and I’ll be back next week with another specially paw-picked book just for mew, and don’t forget that all my previous reviews can be found on my Book Review page.

Don’t furget to subscribe and never miss another review!

Dr. Aziza Explains How to Pick the Best Freshpet Product for Your Dog or Cat

Here’s Why Cats Love To Play With String