Are They Worth It for a Pup’s Mental Stimulation?

If you, like us, enjoy cruising the internet for the latest greatest in pet gear, you won’t be surprised to hear that high-tech pet gadgets are one of the fastest-growing sectors of the pet marketplace. And a chunk of that expansion is thanks to the rise of robotic dog toys.

But they also retail at a far higher price point, making them a significant investment more akin to a bed or crate than a toy that might not live to see the next season. They’re changing the market—but are they engaging and durable enough to justify the price tag?

In short, are robotic dog toys worth it?

What are Robotic Toys for Dogs?

A robotic dog toy is a programable or pre-programmed machine toy that can 1) respond to its environment and 2) operate independently of a person. 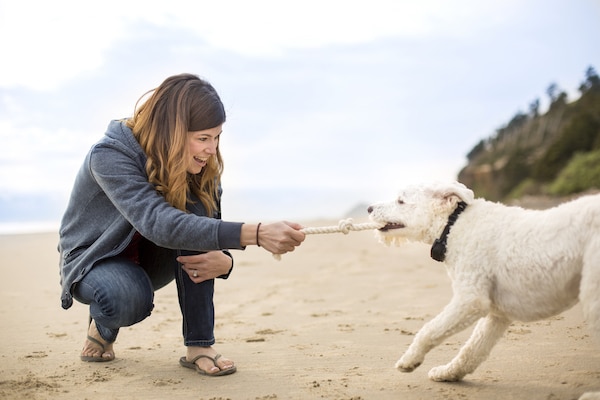 That might conjure images of a human-like computer out of a science fiction story that will one day replace you—but that’s not necessarily the case (or is it?). A robotic dog toy’s form is largely dependent on its function: some toys are all about encouraging physical activities, while others are designed to offer mental stimulation or even companionship in the event of an absent human.

We took a look at some popular products and consulted Dr. Rebecca Greenstein, Veterinary Medical Advisor for Rover and Chief Veterinarian at Kleinburg Veterinary Hospital, to find out why robotic dog toys are on the rise—and whether they really offer the same benefits as their good old-fashioned counterparts.

Pros and Cons of Robotic Toys: A Vet’s Take

Dr. Greenstein’s educated guess is that the pandemic has been a significant factor in the rise of the robotic dog toy, especially with the increase of puppy ownership over the pandemic. “With the onset of the pandemic, and all these pandemic puppies, there’s an increased focus on something we never really talked about before, which is separation anxiety.”

With so many pet parents working at home, puppies were socialized to expect a much greater degree of human contact and stimulation than their predecessors. Even older dogs adjusted to a new normal—one that left many pet parents baffled by an unprecedented rise in cases of separation anxiety.

Robotic dog toys that offer engagement when a human isn’t available are flying off the shelves.

“I can tell you in the last two years of practice, I’ve never heard more about dog cameras,” says Dr. Greenstein, referring to gadgets like the Furbo that let you keep tabs on and interact with your pet, or even offer treats, from a distance. “It provides entertainment for your dog, but also a sense of security.” 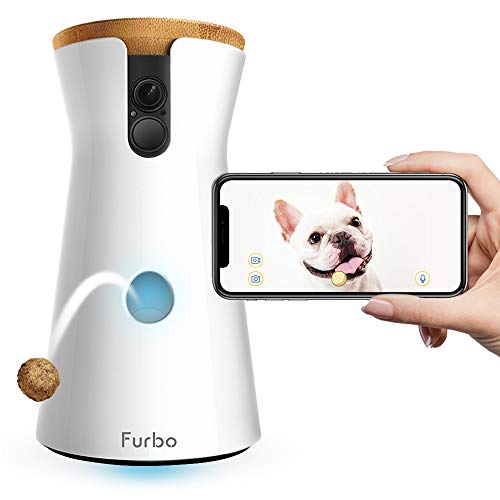 Desperation has perhaps made high price points unusually palatable as workers also seek to distract and engage dogs during meetings or periods of at-home productivity. “Anything that has a potential to be part of our toolkit, I think, has a lot of promise,” says Dr. Greenstein. “It’s just a question of making sure that everyone knows that it’s not a one-size-fits-all solution.”

A robotic toy isn’t a replacement for quality time with a human, and it alone is unlikely to be the answer for dogs that suffer from severe anxiety. But it might be one solid weapon in your arsenal to combat doggy boredom or fear.

There is, however, a catch that Dr. Greenstein neatly homes in on: “Dogs often can be a little bit hard to predict as to what they take to.” No matter how fancy a dog toy is, your dog may not be that interested in it. And while it’s not a big deal if a cheap plush toy is a flop, it feels a lot worse to have spent upwards of $50 or even $100 on something your dog doesn’t enjoy.

It’s a risk unlike previous generations of pet toys—but the rewards might be outsized too. Dr. Greenstein explains that the customized nature of a robotic toy or an app interface might provide you and your dog a helpful way to adjust to life changes, whether that’s the aftermath of a pandemic or more mundane shifts in routine.

To give you a better idea of the range of robotic dog toys on the market, we’ve included some popular examples below and considered how they stack up. Keep reading for more details, including our testers’ experiences.

Rocki: Retailing at $249, the Rocki is what you imagined when you first heard the words “robot dog toy.” Vaguely resembling BB-8 from Star Wars, it’s operated by app and comes equipped with wheels for movement, an HD camera, a treat tosser, and an arm for toys (the default is a laser). It’s brand new on the market, and this Wired reviewer didn’t hold back, revealing that while the toy’s mobility is excellent and the battery life is long, the app can be buggy and the robot only moves when you engage with it via the app—meaning you can’t set it up to run on its own. Word on the street is it might be a better fit for cats.

Wickedbone: This toy is so popular we even conducted a full review of the Wickedbone here. Available for $70, it’s a little less spendy than other robotic dog toys. The gist? It’s a high-tech toy bone that syncs with an app and can roll, spin, and bounce on its own. The bone has an automated setting (for when you’re away) and a manual setting (controlled by you via the app). Our reviewer found that her pup showed lots of interest and interaction, but the manual mode was speedier and had more of an element of surprise than the automated. 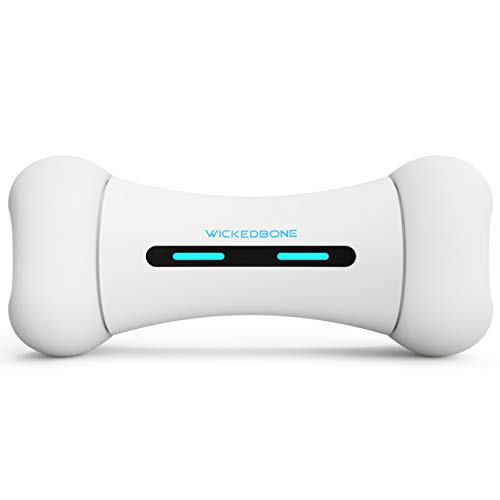 Dogness Smart Cam iPet: Like the Rocki, the Dogness boasts a 360-degree view with HD camera. It tosses treats and has a laser game—all for $299. Amazon reviewers generally love its solid construction and high-quality camera. But a few struggled with connectivity issues, particularly with 5 GHz WiFi. And others reported that its two-wheel design made it susceptible to being knocked over by larger pets.

GoDogGo Fetch Machine: Don’t love throwing a ball over and over? Then you might appreciate this toy, which automatically launches balls for your dog to fetch. Our reviewer was a big fan, noting that on its highest setting, the Fetch Machine can launch a ball as far as 40+ feet away (though shorter distances are possible for more modest games of backyard fetch).

For humans with tireless pups, this can be a real arm-saver—and some dogs have even been trained to play fetch with themselves. It’s a surprisingly practical robotic dog toy with your pup’s exercise as its goal. 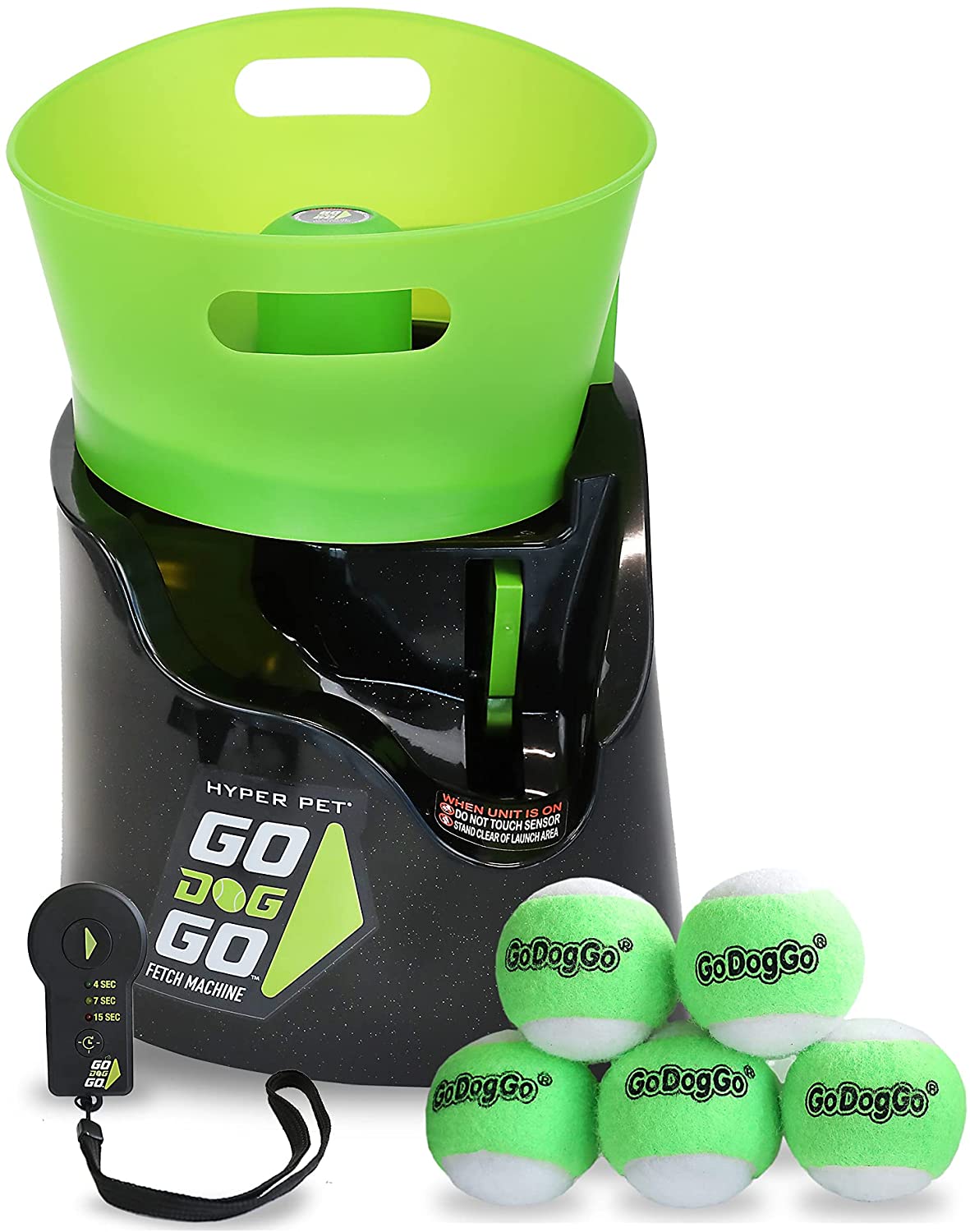 Ricochet: Two rubberized, egg-shaped balls are switched on and placed away from each other. If one moves, the other makes a noise and vice versa. The sound draws your dog to one of the eggs, then when they play with it, the other egg sounds off, making your dog run back and forth between the pair. It seems like a good idea, but we found the very loud, repetitive noises don’t take a break or randomize.

They agitated our test pup, who eventually herded the balls close to each other and actively avoided the one making noise, picking one to pin and chew on—and it’s not a chew toy. Though the price ($55) is reasonable, the painful noise and the intense battery usage (six AAAs) left us feeling this particular robotic dog toy deserves some skepticism. 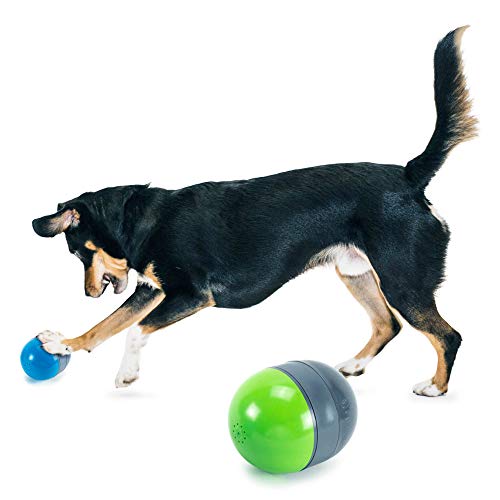 CleverPet Hub: CleverPet’s Hub, unlike the mobile robots above, is stationary—but it does a lot. Like a game console, it can access different types of sequence and memory games that your dog plays by pressing light buttons. When your dog plays successfully, they’re rewarded with a treat in the bowl-shaped area of the Hub.

Normally, the Hub runs between $249 and $349, and though it’s currently sold out, we’ll be keeping an eye out for its return. Reviewers say it works well, it’s great for when your dog is home alone, dogs are engaged by it, and the app is user-friendly. But as this review from digitaltrends points out, it takes some time to teach dogs how to use the console, and if your pup isn’t treat-motivated, it’s going to be a hard sell.

Furbo: A classic! The Furbo is the treat-dispensing camera for our money. Though it doesn’t follow pets around like the Rocki and Dogness, the Furbo does provide a 160-degree view via HD camera, has two-way audio, and is equipped with a treat tosser. At $165, it’s an investment, but not on the scale of a mobile robot camera/toy. Our reviewer loved that it sent a push notification to her phone when her pup was barking (spoiler alert: it’s always the mailman). Its competition is the pricier Petcube—and only time will tell which will win out.

The Bottom Line: Are Robotic Dog Toys Worth It?

Sometimes! While there are undoubtedly some winners like the Wickedbone, the Furbo, and the GoDogGo Fetch Machine, the possibility of turning up a flop like the Ricochet makes the search for a good robotic dog toy akin to a game of Russian roulette with your wallet.

Our best advice is to identify the robotic dog toys that really meet a need for you and your pup. For example, if you’re ready to start leaving a young dog alone for longer stretches but anxious about how they’ll handle it, a treat-dispensing pet cam might be a solid investment. Or maybe your arm is falling off every morning at the park, but you’re still not tiring out your high-energy pup—so a fetch machine could be a great idea.

If, on the other hand, you’re seeking a general-purpose enrichment toy, we recommend taking a hard look at reviews and asking yourself if there’s not a cheaper, simpler toy that might get the job done for a lot less.

“Treat balls are really popular, and I like snuffle mats,” says Dr. Greenstein, who appreciates how simple but effective these toys can be for some dogs. They have the benefit of allowing you to feed your dog treats or kibble in a way that feels like a game. It might be worth considering options like these before you lay down your cash:

This tough chew ball not only rolls and bounces for entertainment, but also dispenses treats, keeping your pup interested and mentally engaged for under $15.

Another favorite treat ball we’ve tried and loved, this $20 toy bobs around, making it fun for your dog to chase after. It also lets you customize difficulty for dispensing treats.

Not much beats a lick mat, according to several Rover pups. You spread their favorite dog-safe treat over the textured surface, and they get to work licking and chewing it off. It also promotes dental health—usually for just around $15.

Simply hide treats or kibble in the tendrils of this popular snuffle mat, which encourages your dog’s natural foraging instincts for around $30.

In short, robotic dog toys can be powerful tools for engaging an anxious or bored dog—especially when your hands are tied up with other tasks. But they’re hit or miss, so we say don’t buy unless a robotic toy offers a truly novel solution that a good old-fashioned toy can’t provide just as well.

Dog InterRUFFS Philadelphia Motorists With Message: Let Us Inside!